at M4DUB.com we have our Leon Cupra R in our long term fleet. If you’ve had a look round the site or been on our Facebook page www.facebook.com/m4dubvw then you will have already seen it.

It started life as a standard 210 BHP Leon Cupra R. It was bought as an MOT Failure that we planned to us as a donor for a 20V turbo conversion in a MK2 Golf. But I said “why don’t we do the work and run it for 6 months?” Famous last words!!!

After no time at all I decided that it was a really nice car to drive as a daily with the right mix of power and comfort.

We decided to PlastiDip it in a custom orange and I was in love. 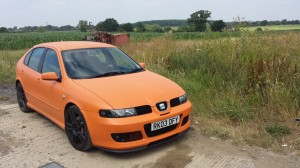 But this feeling wasn’t to last as the dog bone bolt tore itself out the gearbox. So it was decided that it was going to need a new box or be broken for a MK2 Golf conversion.

So it was put in to storage for when it would be needed.

By chance we stumbled across a gearbox which got us thinking. Lets do it!

So we stripped the box out and when we didn’t have customers cars in the workshop set to work on it. A new clutch, cambelt, water pump, and a good service were on the list to start with. 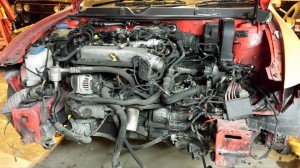 But the deeper in we got the more work we came a cross. Well it wasn’t pretty! Just about every part that you could change needed changing. 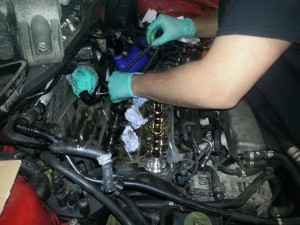 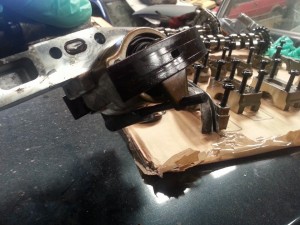 The VVT tensioner had seized, so a new chain and tensioner went in along with new cam seals and a new half moon seal.

All the service parts are genuine from TPS but there is some good news. The parts that are not genuine are upgrades. We’ve gone for a silicone tip, poly bushed front arms and both dog bone bushes, a forge 007p dump valve. This is just a few of the parts that we’ve fitted, we’ve still got to fit a front mount intercooler, uprated fuel pump, 4bar fpr and a 3″system from the turbo back. So we’re almost done but with more customers cars in at the moment we’ve got our hands full and customers come first. I’ll let you know when it’s back on the road and then of course it’s going to need a new dip job. We’ve got something exciting planned for it so watch this space.